Rachel Corrie, Rachel Thaler and many other Rachels besides 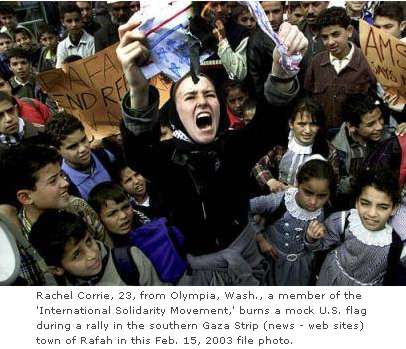 Rachel Corrie, 23, from Washington, USA as she burns a mock United States flag during a rally in the southern Gaza Strip Feb. 15, 2003.
She was killed whilst on an ISM "protest" that involved acting as human shields to obstruct an Israeli anti-terror operation.
She died of her injuries while in the care of Palestinian medics.

Rachel Thaler 16, from Ginot Shomron. Rachel Levi, 19 from Ashkelon. Rachel Levy, 17 from Jerusalem.
All of these teenagers as well the people below this article were killed by terrorists.
(Click on a picture for their story)

By Tom Gross , at the The Spectator


Rachel Thaler, aged 16, was blown up at a pizzeria in an Israeli shopping mall. She died after an 11-day struggle for life following a suicide bomb attack on a crowd of teenagers on 16 February 2002.

Even though Thaler was a British citizen, born in London, where her grandparents still live, her death has never been mentioned in a British newspaper.

Rachel Corrie, on the other hand, an American radical who died in 2003 while acting as a human shield during an Israeli anti-terror operation in Gaza, has been widely featured in the British press. According to the Guardian website, she has been written about or referred to on 57 separate occasions in the Guardian alone, including three articles the Saturday before last.

The cult of Rachel Corrie doesn’t stop there. Last week the play, My Name is Rachel Corrie, reopened at the larger downstairs auditorium at the Royal Court Theatre (a venue which the New York Times recently described as ‘the most important theatre in Europe’). It previously played to sold-out audiences at the upstairs theatre when it opened in April. (It is very rare to revive a play so quickly.)

On 1 November the ‘Cantata concert for Rachel Corrie’ — co-sponsored by the Arts Council — has its world premiere at the Hackney Empire.

But Rachel Thaler, unlike Rachel Corrie, was Jewish. And unlike Corrie, Jewish victims of Middle East violence have not become a cause célèbre in Britain. This lack of response is all the more disturbing at a time when an increasing number of British Jews feel that there has been a sharp rise in anti-Semitism.

Thaler is by no means the only Jewish Rachel whose violent death has been entirely ignored by the British media. Other victims of the Intifada include Rachel Levy (aged 17, blown up in a grocery store), Rachel Levi (19, shot while waiting for the bus), Rachel Gavish (killed with her husband, son and father while at home celebrating a Passover meal), Rachel Charhi (blown up while sitting in a Tel Aviv cafe, leaving three young children), Rachel Shabo (murdered with her three sons aged 5, 13 and 16 while at home) and Rachel Kol, 53, who worked at a Jerusalem hospital and was killed with her husband in a Palestinian terrorist attack in July a few days after the London bombs.

Corrie’s death was undoubtedly tragic but, unlike the death of these other Rachels, it was almost certainly an accident. She was killed when she was hit by an Israeli army bulldozer she was trying to stop from demolishing a structure suspected of concealing tunnels used for smuggling weapons.

Unfortunately for those who have sought to portray Corrie as a peaceful protester, photos of her burning a mock American flag and stirring up crowds in Gaza at a pro-Hamas rally were published by the Associated Press and on Yahoo News on 15 February 2003, a month before she died. (Those photos were not used in the British press.)

While Thaler’s parents, after donating their murdered daughter’s organs for transplant surgery, grieved quietly, Corrie’s parents embarked on a major publicity campaign with strong political overtones. They travelled to Ramallah to accept a plaque from Yasser Arafat on behalf of their daughter. They circulated her emails and diary entries to a world media eager to publicise them. They have written op-ed pieces, including a recent one in the Guardian.

The International Solidarity Movement (ISM), the group with which Corrie was affiliated, is routinely described as a ‘peace group’ in the media. Few make any mention of the ISM’s meeting with the British suicide bombers Omar Khan Sharif and Asif Muhammad Hanif who, a few days later, blew up Mike’s Place, a Tel Aviv pub, killing three and injuring dozens, including British citizens. Or of the ISM’s sheltering in its office of Shadi Sukiya, a leading member of Islamic Jihad. Or of the fact that in its mission statement the ISM said ‘armed struggle’ is a Palestinian ‘right’.

According to the ‘media co-ordinator’ of the ISM, Flo Rosovski, ‘“Israel” is an illegal entity that should not exist’ — which at any rate clarifies the ISM’s idea of peace.

Indeed, partly because of the efforts of Corrie’s fellow activists in the ISM, the Israeli army was unable to stop the flow of weapons through the tunnels near where she was demonstrating. Those weapons were later used to kill Israeli children in the town of Sderot in southern Israel, and elsewhere.

However, in many hundreds of articles on Corrie published in the last two years, most papers have been careful to omit such details. So have actor Alan Rickman and Guardian journalist Katharine Viner, co-creators of My Name is Rachel Corrie, leaving almost all the critics who reviewed the play completely ignorant about the background to the events with which it deals.

So in April, when reviewers first wrote about the play, they tended to take it completely at face value. ‘Corrie was murdered after joining a non-violent Palestinian resistance organisation,’ wrote Emma Gosnell in the Sunday Telegraph. The Evening Standard, for example, described it as a ‘true-life tragedy’ in which Corrie’s ‘unselfish goodness shines through’.

Only one critic (Clive Davis in the Times) saw the play for the propaganda it is. At one point Corrie declares, ‘The vast majority of Palestinians right now, as far as I can tell, are engaging in Gandhian non-violent resistance.’ As Davis notes, ‘Even the late Yasser Arafat might have blushed at that one.’

But ultimately the play, and many of the articles about Corrie that have appeared, are not really about the young American activist who died in such tragic circumstances. They are about promoting a hate-filled and glaringly one-sided view of Israel.

Rachel Gavish, Rachel Charhi, Rachel Shabo and Rachel Kol - all killed by Terrorists
(Click on a picture for their story)

(Links open in a new window)
Who killed Rachel Corrie? at World Net Daily
The Case Against Rachel Corrie, Israel National News
Comment on this article in the forum


Other featured articles on Zionism and Israel

Do not treat Israel like apartheid South Africa - The comparison with South Africa is intellectually lazy, morally questionable, and possibly even mendacious

This site provides resources about Zionism and Israeli history, including links to source documents. We are not responsible for the information content of these sites. These links are NOT intended to be an exhaustive reference about Zionism, but the list will keep growing...

Please tell us about your favorite links and we will review them for inclusion.

Copying - Please do copy these pages, and especially these links to your Web site,  giving credit to Zionism on the Web  www.zionismontheweb.org

Please link to our Sister Web sites - at  http://www.zionism-israel.com   Information about Israel and Zionism

and http://www.zionism.netfirms.com The Zionism Pages

- A comprehensive article including the history of Zionism  as well as links to specific topics and articles about anti-Zionism.

Zionism - Table of contents at the Jewish Virtual Library

Zionism - Definition and Brief History - A balanced article that covers the definitions and history of Zionism as well as opposition to Zionism and criticisms by Arabs,  Jewish anti-Zionists.

The US Library of congress has a comprehensive and balanced set of articles about Zionism:

Zionist Precursors - US Library of Congress

Political Zionism - US Library of Congress

Cultural Zionism - US Library of Congress

Labor Zionism - US Library of Congress

Revisionist Zionism - US Library of Congress

Active Zionism - A Zionist advocacy site with many useful links

Zionism On The Web Directory

Learn more about this site at our main page. Comment and add your thoughts to our forums. See our special section on the British Academic Boycotts of Israel. Learn more at our Zionism Commentary collection. Extend your learning through out collection of links or at our links directory